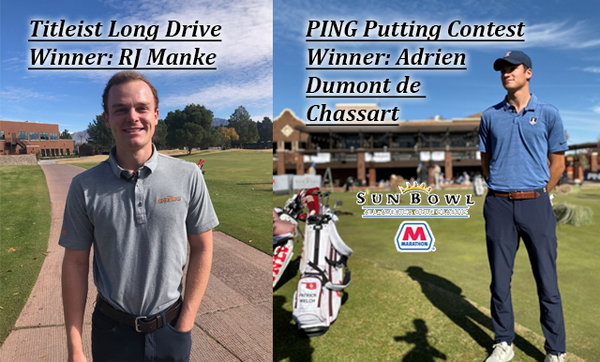 “I wasn’t really nervous when I got up there to hit the ball,” Manke said when asked if it was nerve racking hitting the ball in front of the crowd. “Having the people there on the bleachers made for a great atmosphere.”

Adrien Dumont de Chassart won the PING Putting Contest with a low of 17 putts on a course that featured many obstacles, such as putting from a saddle. The Villers la Ville, Belgium native finished one stroke ahead of Michael Feagles (amateur status: senior at Illinois) and Peter Kuest (amateur status: senior at BYU) both finishing in a tie for second with 18 strokes. A total of 10 player finished the putting contest with 20 or fewer strokes.

“I was a bit nervous because I haven’t played a tournament in about four weeks,” said Dumont de Chassart. “The weather here is amazing and I am looking forward to having fun.”

The Sun Bowl Marathon All-America Golf Classic continues at the El Paso Country Club with two rounds of golf set for Monday, Nov. 25 starting at 8 a.m. (MT). The final round is set for 8 a.m. on Tuesday, Nov. 26.

Some of golf’s biggest names have traveled to El Paso to participate in the tournament including Tiger Woods, Dustin Johnson, Jordan Spieth and Phil Mickelson. Alumni of the All-America Golf Classic have combined to win 53 golf majors and have earned over $2.2 billion in career earnings.