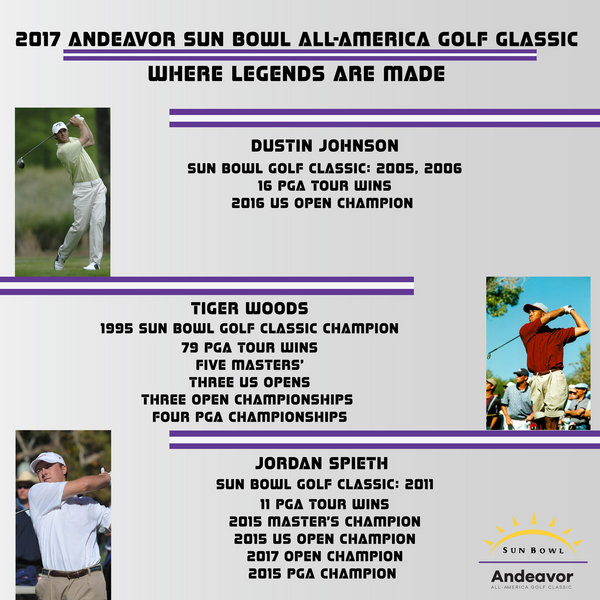 Current PGA players such as Dustin Johnson, Jordan Spieth, Ricky Fowler, Phil Mickelson and Tiger Woods have hit the links at the El Paso Country Club and this year there are 32 amateurs from around the country invading the Borderland.

“This year’s field is one the best we’ve had in years,” said Sun Bowl Association Executive Director Bernie Olivas. “The golf committee has worked tirelessly throughout the year to make this an A-ranked event.”

“Players are invited to this tournament because of their All-America status and outstanding amateur career and ranking,” said Tournament Director Bob Kimble. “I can assure the fans that future PGA players will be out on the course during this tournament.”

Jordan Spieth, Tiger Woods, Phil Mickelson, Davis Love III, Ricky Barnes, Notah Begay and Jerry Pate are just a handful of past participants who went on to have successful PGA careers. College All-America Golf Classic Alumni have combined to win 50 major championships and have earned over $1.8 billion in career earnings.

The annual event starts with the Titleist Long Drive Contest and PING Putting Contest on Sunday, Nov. 19 at 9 a.m. (MT). The best opportunity for fans to get photos with the future PGA players and obtain autographs is on Sunday immediately following the two contests.

John Augenstein – Hometown: Owensboro, Ky. – Amateur Status: So. at Vanderbilt
• Named to the GCAA Freshman All-American team and as a GCAA Honorable Mention All-American selection in 2017.
• Named SEC Freshman of the Year and to the All-Freshman Team.
• Clinched the SEC Championship after winning the deciding matches in the semifinals against Florida and the finals against Texas A&M.
• Has six top 10 finishes in his career, with best finishing coming at the Nike Golf Collegiate in 2016, where he finished fifth.
• Career round of 63 came in second round of Carmel Cup at Pebble Beach Golf Links in 2017.

Chandler Blanchet – Hometown: Gainesville, Fla. – Amateur Status: Sr. at West Florida
• 2017 NCAA Division II Men’s Golf National Champion, Arnold Palmer Award winner and Jack Nicklaus Award winner
• Two-time All-America, two-time PING All-South Region and two-time Gulf South Conference Player of the Year
• Has a school-record nine career victories
• The nation’s top-rated golfer in any division with a school-record 68.76 stroke avg., becoming the first Division 2 player to win the Golfstat Cup
• Won seven individual titles in 2016-17, including six of final seven tournaments with the NCAA Division II Individual title among them
• Posted a school record and career-best round 62 at Kinderlou Forest Golf Club in the opening round of the 2017 Southeastern Collegiate in Valdosta, Ga., which was tied for seventh-lowest round in college golf all year
• Has four career hole-in-ones, with the last coming at the 2015 Patriot Intercollegiate

Cole Miller – Hometown: New Tripoli, Penn. – Amateur Status: Sr. at Penn State
• 2016-17 Scoring Average: 71.50
• First place finish in the Seminole Intercollegiate (March 10-12, 2017) and the NCAA Washington Regional (May 15-17, 2017).
• The lone senior on the 2017-18 edition of the Nittany Lions, Cole Miller has led by example his entire career at Penn State. With a career scoring average of 72.37, Miller would be the program’s all-time scoring average leader if his career were to end today. Miller has represented himself and the University in the Pennsylvania Amateur, The U.S. Amateur and the British Amateur in the summer of 2017, winning the PA Amateur in 2016. His fall 2017 scoring average of 71.25 was the best of his career.
• 2016 Pennsylvania Amateur Champion (Runner-up in 2017)

Mason Overstreet – Hometown: Kingfisher, Okla. – Amateur Status: So. at Arkansas
• 2016-17 Stroke Average: 73.0
• 2016-17 Best Finish: Runner-Up at NCAA National Championship
• Fall 2017 Stroke Average: 69.2
• 2017-18 Best Finish: 1st at Jerry Pate Intercollegiate
• Ended the fall 2017 season with the 19th best stroke average in the country at 69.2.
• Finished the fall 2017 semester with 10 of his 15 rounds under par, including a victory and runner-up finish.
• Shot a combined 5-under in three postseason events last year, finishing T-13th at the SEC Championship, sixth at NCAA Regionals and second at the NCAA National Championship.
• Earned 2017 PING All-America honorable mention honors from the Golf Coaches Association of America (GCAA).
• Became the first freshman in program history to finish even par or better at the SEC Championship.
• Finished T-14th at the Western Amateur Championship during the summer of 2017

• Clemson’s first Walker Cup selection since Kyle Stanley in 2007
• Had second best stroke average in Clemson history in 2016-17 with 70.77
• Defeated Doug Ghim of the University of Texas and Arlington Heights, Ill in 37 holes to become Clemson’s second US Amateur Champion (Chris Patton, 1989)
• Third team All-American as a freshman according to Golfweek
• Honorable mention All-American by Golf Coaches Association
• First-team Freshman All-American…Academic All-ACC in addition to making All-ACC on the course
• First-team Freshman All-American according to Golf Coaches Association and Golfweek

Kyler Tate – Hometown: Winter Garden, Fla. – Amateur Status: Jr. at Central Florida
• Scoring average was 73.2 last season
• Top finish last year was tie for fourth at FGCU Invitational
• Earned Honorable Mention All-America honors from Golf Coaches Association of America
• Ranked second on team with 13 rounds of par or better
• Led team at NCAA Championships with a 23rd-place finish
• Earned four Top 10 finishes
• Led team at The Hayt, where he finished tied for ninth
• Ranked third on team with a 73.2 scoring average
• Only Knight to play in all 13 events in 2016-17

Kristoffer Ventura – Hometown: Rygge, Norway – Amateur Status: Sr. at Oklahoma State
• Earned honorable mention All-America status from both the Golf Coaches Association of America as well as Golfweek after the 2016-17 season
• Was tabbed as a Ping All-Region pick in 2016-17
• Was named a first-team All-Big 12 selection for the 2016-17 season
• Was also named a first-team Academic All-Big 12
• Was named a third-team All-American by both Golfweek magazine and the Golf Coaches Association of America after the 2015-16 season