MAKING THE CONNECTION: MANY FORMER COLLEGE ALL-AMERICA PARTICIPANTS DO WELL AT PEBBLE BEACH WITH SPIETH LEADING THE WAY February 15, 2017 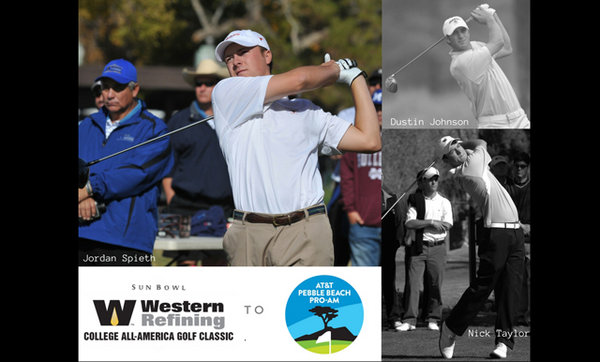 PEBBLE BEACH, Calif. — Jordan Spieth, who won the AT&T Pebble Beach Pro-Am on Sunday, Feb. 12, was one of 23 players who previously made their way through El Paso playing at the Sun Bowl Western Refining College All-America Golf Classic (SBWRCAAGC).

Spieth, who highlighted his victory with a 30-foot birdie putt on the 17th hole with the Pacific Ocean as a backdrop, played in the 2011 SBWRCAAGC at the El Paso Country Club. He closed his 2017 Pebble Beach performance with a 2-under 70 for a four-shot victory over former U.S. Amateur champion Kelly Kraft, a close friend from Dallas who couldn’t get a putt to fall that might have put a little pressure on Spieth.

During the 2011 SBWRCAAGC, Spieth, then a freshman at Texas and Golfweek’s top-ranked player, struggled a bit finishing T-15 with Arkansas’ Austin Cook at 5-over.

“I was able to get out to Pebble Beach for the tournament and it is always great to catch up with some of these guys,” said Sun Bowl Executive Director Bernie Olivas. “Brandon Hagy, who played in El Paso when he was with California, told me that he still has the boots he got from Lucchese, plus others mentioned they still remember coming to El Paso.”

Dustin Johnson, who finished third in the Pebble Beach Pro-Am on Sunday, played in El Paso during the 2005 and 2006 SBWRCAAGC. He played for Coastal Carolina at the time and tied for 16th and 23th in respective years.

Brandt Snedeker, another top-five finisher at Pebble Beach this past weekend, played in the 2002 SBWRCAAGC along with J.B. Holmes and Ricky Barnes (Arizona). Snedeker was playing for Vanderbilt and finished in fifth, while Holmes (Kentucky) placed in a tie for eighth.

One name that most golf fans know is Phil Mickleson. He came to El Paso to participate in the SBWRCAAGC in 1989, but withdrew from the tournament during the early rounds of play.