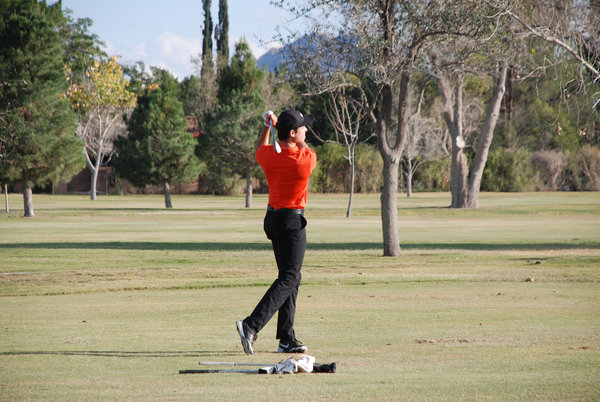 Ventura fired off 12 birdies on the day carding a 4-under-par 67 in each round for a two round total of 8-under-par, 134. Ventura did well on par-4-holes and played consistently all day on the 6,889-yard, par 71 El Paso Country Club course.

“I was just consistent in every part of the game,” Ventura said. “I was able to strike the ball well and get in position to get some birdies. I felt good out there. It has been a good fall for me. I’ve been playing well. This a great tournament to be a part of and there are a lot of good players. I hope to come out Sunday and be just as consistent.”

Ventura won the Blue Media Blind Flop Contest on Friday getting his ball over the wall and within only 7-inches of the cup and that might have given some momentum to him heading into the first day of play.

Burns, one of the best players in the nation, was neck-and-neck with Ventura after the first round and marked only one less birdie than Ventura. Burns, although, had two more pars than Ventura, which seems to have kept him within one stroke of the leader. Burns was the No. 1-ranked golf recruit in the country, in both the Golfweek Junior Golf Rankings and the Polo Junior Golf Rankings.

USC sophomore Justin Suh is currently sitting in third place with a 5-under, 137, while carding an eagle on the par 5, 547-yard hole No. 13 in round one. John Oda of UNLV is in fourth at 4-under par, while Rico Hoey of Southern California and Charles Kim of Arkansas are tied for fifth at 3-under par. Kim played an extremely fast first round, finishing in approximately two hours and 40 minutes. He fired rounds of 72-67.

“They didn’t change the pin placements for the second round and that made a difference,” Kim answered when asked about the improvement from round one to round two.

The Sun Bowl Association and Western Refining continue to host the event with the final round of golf set for Sunday, Nov. 13 starting at 8 a.m. (MT) at the El Paso Country Club. Live scoring will be available online at GolfStat.com. The event is free and open to the public.