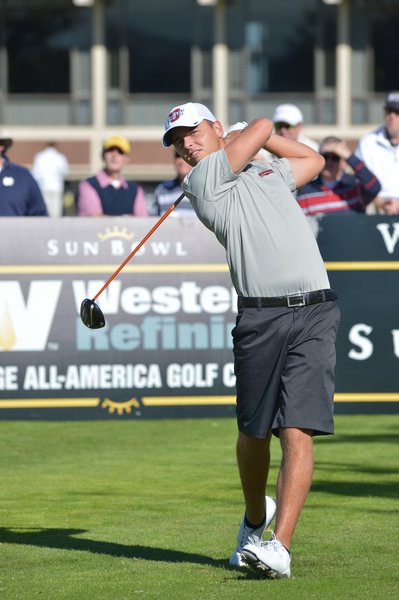 EL PASO, Texas – The field is set and the Sun Bowl Association has announced that there are 21 of the nation’s top collegiate golfers making their way to the Sun City to play in the 41st edition of the Sun Bowl Western Refining College All-America Golf Classic that runs Nov. 6-8 at the El Paso Country Club.

There are 11 All-Americans playing in this year’s tournament ranked amongst the top 100 amateur golfers, according to the World Amateur Golf Rankings. Among the top-ranked players are the following: Texas junior Beau Hossler (No. 7), Texas sophomore Scottie Scheffler (No. 15), Vanderbilt junior Matthias Schwab (No. 17) and Louisville senior Robin Sciot-Siegrist (No. 24).

The 2015 field of All-Americans also includes the Division II National Player of the Year, Santiago Gomez of Nova Southeastern, 2014-15 ACC Freshman of the Year Claudio Correa, 2014-15 PING All-Central honoree Blair Hamilton of Houston and the 2015 SoCon Player of the Year, Adrian Meronk of East Tennessee State. UNLV’s John Oda, who was the recipient of the 2015 Mountain West Scholar Athlete Award and a 2015 PING All-West Region honoree, will also be a part of the field this year.

USC junior Rico Hoey, who finished in a tie for second place during last year’s Sun Bowl Western Refining College All-America Classic, is returning for another chance at the Lee Trevino Trophy.

“Western is proud to again team with the Sun Bowl Association to welcome the most college golf’s most elite players in the country to El Paso,” said Jeff Stevens, President and CEO of Western Refining. “For over 40 years, this tournament has showcased the best college golfers to our city. The alumni of this tournament are now the legends of the PGA Tour and this week El Pasoans will have the chance to see the future legends of golf perform at El Paso Country Club.”

Each university represented by the Western Refining College All-Americans will receive a $1,000 scholarship.

Alumni of the Golf Classic have gone on to earn more than $1.6 billion and winning 617 events on the PGA Tour. Over 145 colleges and universities have participated in the tournament, raising more than $753,000 in scholarship money for the participating institutions.

Jordan Spieth, Tiger Woods, Phil Mickelson, Davis Love III, Ricky Barnes, Notah Begay and Jerry Pate are just a handful of past participants who have gone on to have successful PGA careers.

Claudio Correa – South Florida
Sophomore – Honorable Mention All-American
Appeared in all 37 rounds for USF as a freshman, averaging 71.7 strokes per round to earn the American Athletic Conference Freshman of the Year award, as well as All-Conference honors and PING All-Region honors… shot par or better 20 times, including three rounds during the NCAA Championships stroke play, and logged six top 10 finishes in 2015… finished sixth in the individual NCAA Championship leading USF into match-play with a best-ever top eight finish as a team… won the 2015 Gator Invite, carding a 54-hole total of 205 (-5), and finished in the top 10 six different times… posted a 10-stroke victory in the 2015 Mexican Amateur Championship at the Yucatan Country Club in Merida, Mexico shooting a 5-under par, 283 … earned an automatic exemption into the 2015 U.S. Amateur Championship at Olympia Fields Country Club in Illinois.

Riley Davenport – Charlotte
Senior – Honorable Mention All-American
2015 All-American Honorable Mention… in 2015, Played 12 tournaments covering 35 rounds that includes setting a new school-record for best finish at the NCAA Championship tying for eighth in the 156-player field… shot three-consecutive rounds of 71 at the 2015 Bayou City Collegiate to register his second-best finishes of 213 and tie for seventh out of 87 other golfers… his 68 at the 2015 Gary Koch Invitational started his best 54-hole tournament finish in his career adding up to 212 (68-72-72) while he tied for fifth out of 81 competitors… played in eight events during 2014 posting best finish at the 2014 Tiger Invitational in March finishing tied for 12th with an even-par tournament of 216 (74-72-70)… his five-over 221 was tied for 31st and earned him Rookie of the Week (Feb. 27) at the 2013 Bayou City Collegiate Championships.

Rigel Fernandes – South Florida
Junior – Honorable Mention All-American
In 2015, Finished in the top 25 a team-high 10 times, and recorded a top-10 finish four times … tied for the individual title at the 2015 Irish Creek Collegiate, shooting 208 (-8) over three rounds… helped USF to a first place finish at the 2015 Yale Golf Course… named a 2015 PING All-Region member, and was one of five All-American Athletic Conference honorees from USF… in 2014, became just the fifth golfer in USF history to shoot less than 1.15 strokes above par… finished in third at the 2014 Seminole Intercollegiate, shooting 213 (-3)… As a high-schooler in 2013, earned AJGA All-American honorable mention in 2013.

Santiago Gomez – Nova Southeastern
Senior – Division II National Player of the Year
Earned multiple postseason awards in 2015, after a season in which he finished as the No. 1-ranked golfer in all of Division II and earned the highest individual honor in the NCAA as the Jack Nicklaus Award winner… earned First Team PING All-American honors, by the GCAA, was NCAA All-South Region, and was named Sunshine State Conference Men’s Golfer of the Year as well as First Team All-SSC… finished second at the 2015 NCAA South/Southeast Super Regional… his birdie putt on the 54th hole of match play earned the clinching point, giving the Sharks a 3-2 win and the 2015 NCAA National Championship… finished the 2014 Spring season ranked No. 3 in all of D II, while being named a PING D II second-team All-American.

Brandon Matthews – Temple
Senior – Honorable Mention All-American
Carded a one-under par 70 on the final day of the 2014 American Athletic Conference Men’s Golf Championships to tie for fourth-place with a one-under 213… selected to compete in the 2014 NCAA Golf Championship and entered with a 71.5 average … tied for 38th overall at the NCAA Raleigh Regional carding a six-over 77… shot a one-over 73 to tie for 70th overall at the 2014 U.S. Amateur before missing the quarterfinals by one stroke… won the 2013 Golf Association of Philadelphia’s 109th Open by carding a two-under 140… tied for second at 2013 PA Amateur Cup… advanced to the Quarterfinals of the 2013 U.S. Amateur… named to the 2013 Atlantic 10 All-Conference Team… honored as 2013 Atlantic 10 Rookie of the Year.

Taylor Moore – Arkansas
Senior – Honorable Mention All-American
Earned co-medalist honors at the 2014 U.S. Amateur… qualified for the 2014 U.S. Amateur as the top finisher at Texarkana Country Club… finished tied for 2nd at the 2015 SunTrust Gator Invitational… earned 6th place at the 2015 SEC Championships… ended the 2014 season ranked No. 75 by Golf week, No. 85 by Golfstat and No. 115 in the GolfstatCup… garnered SEC Spring Academic Honor Roll honors in 2014… named Co-SEC Freshman of the Year and was selected to the SEC All-Freshman team in 2013… earned a spot on the 2013 SEC First-Year Academic Honor Roll.

John Oda – UNLV
Sophomore – Honorable Mention All-American
Recipient of the 2015 Mountain West Scholar-Athlete Award and member of the Academic All-MW team… also made the 2015 Dean’s Honor List… named honorable mention All-America and selected to the 2015 PING All-West Region team… was the 2015 MW Freshman of the Year and also earned All-MW honors… named the 2015 Earl E. Wilson Most Valuable Player, which is given annually to the top player on the UNLV squad… during the summer of 2015, he played in the USGA Amateur Championship, the Western Amateur, the Sahalee Players Championship and he was selected to represent the USGA at Carnoustie in Scotland at The (British) Amateur Championship… he tied for 10th at the Sahalee Players Championship and made the round of 36 at The Amateur Championship.

Brandon Pierce – LSU
Junior – Honorable All-American
The top-ranked player and leading scorer for an LSU team that swept SEC and NCAA team championships during a historic 2014-15 season… one of the NCAA’s Top 30 players in the final season rankings for both Golfstat (23) and Golfweek (28) released following the NCAA Championships in 2015… an All-American for the first time in his collegiate career as a third-team selection by Golfweek and honorable-mention selection by the Golf Coaches Association of America… also a 2015 PING All-Southeast Region performer for the first time… was a 2015 second-team All-SEC selection by the league’s head coaches on the strength of his outstanding sophomore season… named the 2015 Louisiana Collegiate Player of the Year and a first-team All-Louisiana performer as the top player in the state by the Louisiana Sports Writers Association.

Max Rotfluff – Arizona State
Senior – First Team All-American
In 2014-15 has recorded nine top-10 finishes in 14 tournaments, including first-place finishes at the Alister MacKenzie Invite and the Arizona Intercollegiate… shot a career-low 63 in the second round of the ASU Thunderbird Invitational… earned GCAA first-team All-American honors and second-team Pac-12 All-Academic honors… recorded three top-10 finishes, including a second-place finish at the Prestige at PGA West, in his sophomore season of 2013-14 and shot 72.16 in eight tournaments… finished junior year (2014-15) with a 3.49 GPA in marketing, and is on pace to earn his marketing degree in May of 2015 … earned Dean’s List in the spring of 2015.

Zach Seabolt – Winthrop
Junior – Third Team All-American
Is ranked No. 8 in the country by Golfstat following the 2014 fall season… is No. 9 in the Palmer Cup point standings following the 2014 fall season… played in four tournaments and 12 rounds during 2014 fall season… captured two tournament titles at the Northern Intercollegiate with a 4-under 212 and the Rees Jones Intercollegiate with an 8-under 208… was selected to participate in The Patriot All-America tournament on Dec. 29-31 at the Wigwam Arizona Gold course to honor fallen service men and women of the U.S. Armed Forces, and finished tied for 10th … Earned At-large selection to the 2014 NCAA Raleigh Regional where he tied for 20th place at 3-over par 216… was voted 2014 Big South All-Conference Team… earned the 2014 Big South Conference Freshman of the Year award.

Zach Wright – LSU
Senior – Honorable Mention All-American
2015 PING Honorable Mention All-American… 2015 second-team All-SEC… 2015 PING All-Southeast Region… 2015 SEC Community Service Team… 2014 U.S. Amateur Qualifier… 2013 Louisiana Classics Champion… 2012 U.S. Amateur Qualifier… one of two Tigers to post a perfect 3-0 record in match play at the 2015 NCAA Division I Men’s Golf Championships held at Concession Golf Club in Bradenton, Florida… joined senior All-American Ben Taylor in winning all three matches to lead the Tigers to their fifth national championship in program history and their first in 60 years since 1955… ran his record to a perfect 5-0 in match play at the NCAA Championships in back-to-back appearances in 2014 and 2015… scored LSU’s second point in a 4-1 win over the No. 5-seeded USC Trojans in the NCAA Championship Match with his 3-and-2 victory over Sean Crocker en route to the national championship.

All events listed above will be held at the El Paso Country Club and are free and open to the public.